The Inside Story On Managing Your Memory

SEVEN STEPS TO MANAGING YOUR MEMORY: WHAT’S NORMAL, WHAT’S NOT, AND WHAT TO DO ABOUT IT. Andrew E. Budson. Maureen K. O’Connor. Oxford University Press. 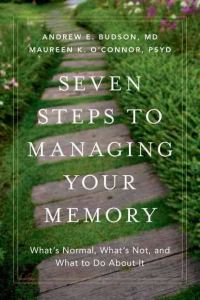 If Douglas Adams hadn’t already done it, I would have suggested that this book have the words “Don’t Panic” in large, friendly-looking type on the cover, since Seven Steps To Managing Your Memory is a highly accessible and informative treatise on the myriad aspects of memory.

Memory is fallible, inconsistent, and sometimes just flat-out deceptive. That’s normal memory, mind you. At times, we all forget things like where we left our keys or parked the car, sometimes forgetting why we walked into a different room (I read elsewhere that this phenomenon is called a “portal discontinuity event,” with this sudden type of memory lapse triggered by the change in the state of input caused by entering that new room).

False memories are another common memory failing that we all share. For example, police training programs often include a class that is suddenly interrupted by someone running in and grabbing a student’s computer or purse before quickly dashing off. The teacher then calls the cops who arrive and ask students to describe the thief. The following day, the instructor has a list of the descriptions that were provided and proceeds to show the students how wildly their physical descriptions varied.

This kind of staged event is often a part of the police-study curriculum and is intended to highlight the unreliability of eyewitness accounts, documenting just how unreliable memory can be.

The preceding illuminate examples of normal memory glitches. In turn, Seven Steps To Managing Your Memory offers a road map on how to alleviate these common problems – the goal to help us avoid both the loss of time and the stress that such memory lapses cause.

The Budson-O’Connor text also details more grossly abnormal memory glitches, such as needing the cops to find where you parked your car or requiring a programmer to guide you through the applications on your new computer. To this end, Seven Steps To Managing Your Memory discusses the standard clinical tests used to determine if an individual has more serious (pathological) memory loss, while dissecting the different medical conditions that cause the memory to fail.

Specifically, Budson and O’Connor explain the processes at work in afflictions like Alzheimer’s and Vascular Dementia, while offering patients a primer on how to cope with the mental deterioration these diseases unleash. In addition, the text explains why an elderly patient may be unable to recall what he had for breakfast, or if he had breakfast, while vividly recalling scenes from childhood. However, the balance of the book focuses on providing the reader with a practical outline on how to cope with memory problems. A useful section on methods to avoid memory disorders has also been included, with lifestyle and diet changes, medications, and various mental and physical exercises cited as things that sometimes alleviate symptoms.

Even though modern man concentrates on acquiring material possessions, memory is nonetheless the sum of our subjective existences. Without memory, we may as well be geraniums, since there is no true consciousness without it. In turn, understanding how memory works, and how well it works, is key to understanding yourself. For this this reason, Seven Steps To Managing Your Memory is recommended reading for everyone.

This entry was posted on October 31, 2017 by Jacob Aiello in 2017, In the Spotlight, November 2017, Rat On Fiction & Nonfiction and tagged Book Review, Books, Guest Review, Oxford University Press.