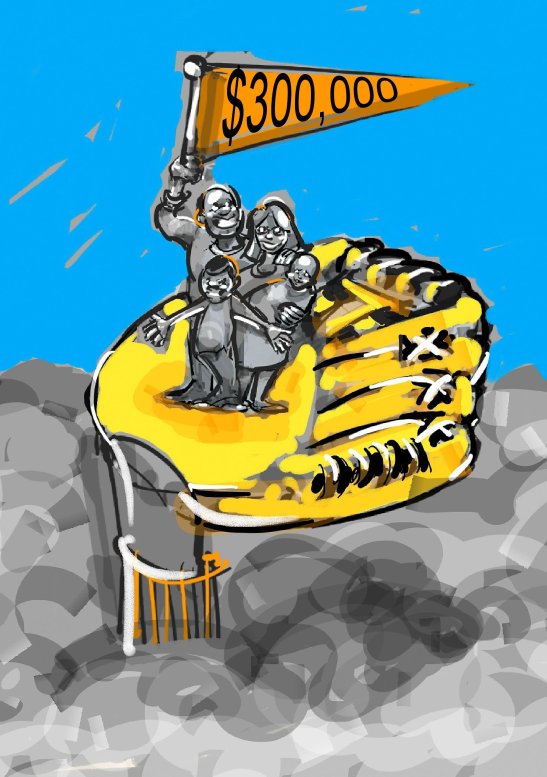 In June I published a column spotlighting the “Heading Home Campaign” – a collaborative effort between the San Francisco Giants, Hamilton Families and Airbnb aimed at bringing shelter to the hundreds of families who call the streets and back alleys of San Francisco home.

During the Heading Home Campaign, Airbnb and the Giants stepped to the plate in a big way, partnering to pledge $1,000 to the program for every run the team scored at AT&T Park this season. Their final home game was on October 1; when the final numbers were tallied, the duo had generated $300,000 for the campaign, meeting the full target amount they had settled on in April.

As the majority of the fan-base knows, the Giants have long been committed to giving back to the city that gave them a home some 6 decades ago, with the team often dedicating its energies to problems that plague society. In turn, the push to bring a swift end to family homelessness was a natural fit for the orange and black.

“We were obviously compelled to bring our support to one of the most pressing issues facing San Francisco and the entire Bay Area,” says Shana Daum, Vice President of Community Affairs and Public Relations for the Giants. “In essence, our role has really been about providing awareness of the issue to our fans [in addition to monetary support]. And on that level, I think we’ve been very successful.”

“The issue really hit home for Larry [Larry Baer – CEO of the Giants],” continues Bobby Baksa, Community and Player Relations Manager for the Giants. “Larry grew up here in San Francisco and he went to public schools in the city, so the problem hit him in a very real way.  Look, families don’t choose to be homeless. It’s something that happens to them that they often don’t have control over.  [In light of this], the Giants set out to put faces on these people. And I think we were able to accomplish that.”

This $300,000 purse correlates to big bucks that will go a long way toward funding permanent shelter for a multitude of families. But it’s not nearly enough. The sad truth is, hundreds of families still remain without stable housing, with an arena full of pre-teen children starting the new school year out in the street. According to information published on the Hamilton Families website, a staggering 1,145  families in San Francisco don’t have housing, with some 1,800 students identified as ‘homeless.’

As I reported in June, Hamilton Families is the engine driving the program. Founded in 1985 as the Hamilton Family Center, it served as the first homeless shelter in the city dedicated to helping link families to housing. Over the span of the past two decades, Hamilton has grown in leaps and bounds, now helping homeless families on both the east and west sides of the San Francisco Bay.

The cash the Giants and Airbnb raised this year for the Heading Home Campaign equates to about 1% of the 30 million Hamilton Families hopes to raise by 2019 as part of an initiative to house 800 families and completely eradicate family homelessness in the city. To conquer the problem, Hamilton has taken to a unique path called “rapid re-housing.” Rapid-rehousing strives to reduce the time a family spends in the throes of homelessness by giving people immediate access to services that have been tailored to their specific needs (while offered without pre-prescribed conditions such as employment, a clean record or sobriety). In essence, the program is about stripping away barriers so people can connect to the services they need to build a roof back over their heads. And so far, it’s working splendidly; last year, Hamilton brought 237 families permanent housing.

“The Giants are part of a much larger campaign, really,” Daum points out. “We’re really just a piece of the puzzle to help raise thirty million dollars for Heading Home. Even though our season ended last weekend, this still needs support from everybody – because the problem is not going away.”

The message now abundantly clear: You can’t just return to your blinders because there are no more baseballs flying around AT&T Park and the emphasis is off scoreboard donations. The painful reality is that scores of Californians are teetering at the edge, a couple of missed  pay checks from a homeless shelter. Yes, the rental market in the Bay Area is that tenuous – incomprehensibly, the cost of housing in San Francisco now rivals what people pay in New York City. And there is no projected end to the spiral. It’s a scenario that threatens the very infrastructure of our society, the faces of these families who exist without a home in San Francisco serving as stark reminders of how quickly the picture of a life can turn sour.

Nonetheless, some permanent steps were taken this year to eventually cure the problem: Just as important as the money that flowed to Hamilton Families was the way the team was able to bring the situation into the public consciousness – raising awareness, illuminating those shadows in the alley.

Like Daum says, the 2017 Major League Baseball season is over for the Giants, but we’re still collectively at the plate. Now it’s up to each of us to not forget the lesson just learned and rally around a cause that says no kid deserves to grow up in a car parked on the street.