Noam Chomsky remains one of the leading voices analyzing world politics, and Who Rules the World? continues his ultimate mission – that being, to make sense out of the structure of government. In this cutting-edge study, Chomsky looks at just why the United States still casts the authoritative shadow in terms of  the world hierarchy. In the course of his narrative, Chomsky chronicles a series of  events (the history of the United States and Cuba; the conflicts in Iraq and Afghanistan; the Israel-Palestine battle) to show that even though the U.S.  preaches human rights and equality for all, it often diverts from its stated platform into overt imperialism. Chomsky has always been a writer with guts, and he apparently considers it his purpose on earth to educate his readers on what is really going on behind the walls of ‘government.’ To this end, Who Rules the World? comes to us a call to open up our collective eyes, commanding us to hold our elected representative accountable for their actions. As Chomsky documents, the world is now at a precipice, and whether or not we survive as a species will require our leaders to think less about power and more about how to best use the world’s resources for the benefit of civilization. Read by Brian Jones, who delivers an impassioned and impeccable performance. 10 hours on 8 CDS.

Also of note from Macmillan Audio 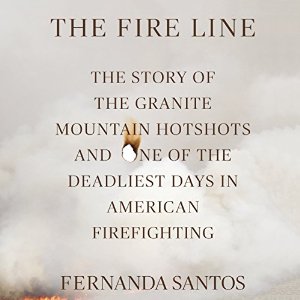 For the past several years, the western portion of the United Sates (especially California, Arizona and the Pacific Northwest) has been in an unprecedented drought. In turn, these heavy drought conditions have created some of the worst wildfires that have ever been seen. In The Fire Line, esteemed New York Times reporter Fernanda Santos, tells the story of just one such fire in Yarnell, Arizona in June of 2013 that was set off by a lightning strike. As the fire quickly spread across a hillside and towards the town, a crew of 20 fire-fighters – the Granite Mountain Hotshots – heard the call and  rushed toward the flames in an attempt to thwart the unruly spread of the blaze.  The Granite Mountain Hotshots was an elite assemblage of men who had been trained to fight the worst wild-land fire conditions. The platoon lived on the road, traveling to where the fires roared – their collective job to try and save lives and timber and property without dying in the process. But the Yarnell fire was very different, for it burned in the midst of their own homes and threatened their own world. In the end, the entire nation would intimately come to know about the Yarnell fire, which resulted in the most fatalities among fire crews since the 9/11 terror attacks in Manhattan. What’s truly unique about The Fire Line is that it writes the story of the men who risked themselves to save other peoples’ lives and possessions. To accomplish this, Santos conducted over a hundred hours of interviews with the fire-fighters’ families, friends and colleagues as she paints this living breathing picture of the nameless men and women we rely on to keep the flames off our doors. Read by Ari Fliakos, whose voice hovers taut with tension.  6.5 hours on 5 CDS.

This entry was posted on May 31, 2016 by Jacob Aiello in 2016, In the Spotlight, June 2016, Rat On Audiobooks and tagged Audiobook, Book Review, Books, Macmillan Audio.