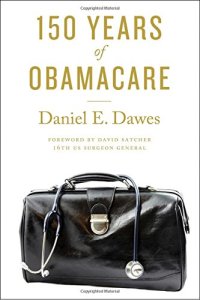 Health-care attorney Daniel Dawes is an expert on insurance reform and the implementation of  the Affordable Care Act (ACA), or what is now commonly referred to as “ObamaCare.” In this erudite study, Dawes chronicles the back-story to the legislative odyssey that culminated in the passage of the most important set of laws in the United States since President Franklin D. Roosevelt signed the Social Security Act in 1935.

For most Americans, Obamacare is a confusing set of laws that somehow affords them a path to secure medical insurance. Ask the random person on the street, and all they really know is that if they can’t pay the full premium for a policy, the government will step in and share in the cost. But that’s about the extent of their understanding. And absolutely no one seems to know where the idea of the Act was actually borne.

In 150 Years of ObamaCare,  Daniel Dawes (executive director of health policy and external affairs at Morehouse School of Medicine in Atlanta who is also the co-founder of the Health Equity Leadership and Exchange Network) gives us an inside view of the health equality movement in America. “Inside” because Dawes himself stood front and center, working with the organizations that bulled through the policy changes that leveled the healthcare playing field, presenting every citizen the chance to obtain services from a doctor.

Some of the most compelling passages of 150 Years of ObamaCare are found in the reproductions of the emails and letters written by those who worked to get the law passed: These segments giving readers a real-time snapshot of what it takes to sharpen and shape the fragment of an idea into a concept, and then into a full-fledged ‘policy’ that speaks for the collective citizenry.

Since Obamacare was first implemented, many statements have been made postulating on healthcare reform; unfortunately, most of these statements are wholly incorrect. Accordingly, Dawes wrote this book to set the record straight as he comes to explain what the ACA is; what it is meant to do; and who it seeks to serve.

Recommended to the general reader interested in learning about the origins of Obamacare and why it was critical for the ACA to be created. Also recommended to libraries at the college level and in the public sector as a general reference text: this information is vital to every American who now needs to take a more active role in all aspects of their healthcare, including the insurance phase. Finally, 150 Years of ObamaCare would be an appropriate supporting teaching text in both health policy courses and political science classes charged with addressing President Obama’s historical ascent to the White House.