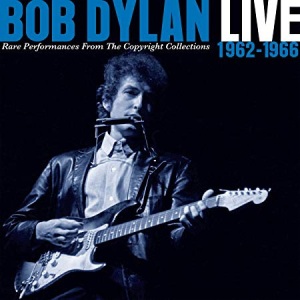 Bob Dylan has refined his stage persona and perfected his live performances during the course of his 3-decade-long “Never Ending Tour.” But longtime followers know he didn’t always sound like this.  In turn, Bob Dylan Live 62-66 brings us back to the beginning of ‘live Dylan’ and serves as a perfect example of how he sorted through his psyche to grow comfortable performing on stage. From the outset, Dylan was an accomplished poet, however, I don’t believe he always felt at ease in front of thousands of random eyes. Often times in the early years, there was a hint of nervousness to his performances; nonetheless, these odd moments somehow came to enhance each concert. This album brings us 29 quintessential live cuts from his seminal years. You will note an absolute raw and primal energy to the recordings as they come to reveal the brilliance of the poet now recast as orator. There is no finer example of this than in Dylan’s 1964 rendering (London) of “Mr. Tambourine Man.” As good as the 1966 Manchester version of the cut is, this version pays homage to the Bringing It All Back Home original  we heard back in 1965. Also, this version of “Seven Curses” shows exactly why Dylan was able to storm New York and become the folk movement. This is a hallmark acoustic recording, while the writing  owes as much to Whitman and Ginsberg as it does to Pete Seeger and Woody Guthrie. The usual and not-so-usual suspects round out the double-disc’s spotlight moments: “Visions Of Johanna” from 1966; “Desolation Row” from 1966; “Blowin’ In The Wind” from 1962 (at Gerde’s Folk City); “Corrina, Corrina” also from a 1962 performance at Gerde’s Folk City (showcasing Dylan’s gorgeous guitar work); and “When The Ship Comes In” from the 1963 March on Washington. After one full tour through this material you will see that Dylan’s writing exists on a completely different plane; even in 1963 it was obvious his music was destined to withstand the test of time. In the end, Bob Dylan Live 62-66 provides the living testament to Dylan’s genesis as a performer, providing us a defined picture of an artist developing his personal relationship with the audience. Even though you’ve heard these songs before, you have not heard them from the altar of this perspective. And because of this, the official release of Bob Dylan Live 62-66 is hailed as a not to be missed event.

Go to bobdylan.com for information.

Richard Manuel – piano (does not appear on Track 12)