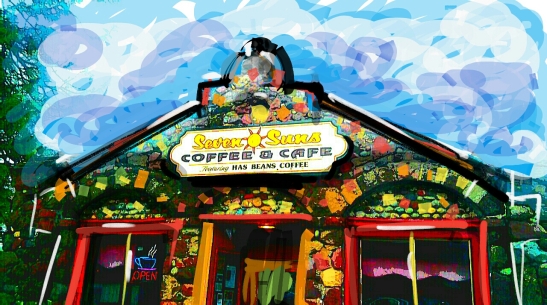 Located about a mile from the freeway and directly off the first Mount Shasta exit (Northbound I-5), Seven Suns Cafe has become a Mt. Shasta main-stay. Originally opened in the 1990s, the coffee shop was purchased in 2006 by current owners Juan and Anne Rivera, who slowly rewrote the concept and modernized the menu.

The Riveras changes turned a so-so coffee stop into one of the more notable places in this tiny mountain town. Seven Suns now sports 10 varieties of Has Beans Coffees, with the white french roast and the organic house blends proving the most consistent. Augmenting the coffee board are 30 different varieties of Davidson’s Teas, most of which sport organic bases. In essence, the coffee board is basically what you’d expect from an established cafe; what’s really enticed the throng of regulars that frequent the place are the pastries and the savory food selections.

Rather than do pre-ordered, ready-to-bake sweets like many cafes do these days, the Riveras approach has raised the level of the cafe to that of a more urban-like bakery. As such, they hired a dedicated baker who makes all the pastry items on site. Buttressing the broad sampling of scones and muffins (each day features a different fruit selection) that Seven Suns sells are both zucchini and banana breads, in addition to several different kinds of cakes. Locals seem to gravitate toward the house-made carrot cake, remarkable for its complexity of flavor and airy texture. This layered desert is built with a sweeping array of minced carrots, pineapple and raisins, topped with a fresh cream-cheese frosting and chopped walnuts. Another must-try is the Ranger Cookie: a crisp-cooked amalgamation of chocolate ships, marshmallow, oatmeal and rice-krispies that puts its own imprint on the idea of decadence.

But it’s hardly all about pastries here. Seven Suns has actually carved out its reputation as a lunch destination that stresses flexibility over rigidity. For example, instead of separating its breakfast and lunch selections, the cafe makes its full menu available all day long. So, if you feel like breakfast at 2 PM, you can order off the morning menu without limitation. This is an important fact, since the Breakfast Burrito is one of the better things on the board, featuring a flour tortilla generously stuffed with cheese, scrambled eggs, hash browns and either ham, bacon, sausage, avocado or Cajun sausage. For $8.59 this item is often enough for 2 meals. The Breakfast Sandwich also comes with the same fillings and can be built on a croissant, which adds a buttery richness to the dish. A eclectic sampling of soups, salads, burritos and wraps frame the lunch menu, with the Apple Walnut Spinach Salad; Super BLT (the standard bacon-tomato fare dolled up with purple onion and avocado on sour dough); the classic Club; and the Chicken Burrito (with house-made salsa) serving as the centerpieces.

In terms of the modern California coffee house, Berkeley and San Francisco set the benchmark in the 1950s, showing the world what a good cafe looks and tastes like. And the best parts of Seven Suns (the vast mix of pastries, the hearty coffees and the way the staff serves your food and then gets out of your way so you can be alone with your thoughts) recollect the best of that urban coffee-bar experience of long-ago.

However, at  Seven Suns it ends even better – there’s no traffic or parking problems to navigate, while the place looks up at one of the most majestic mountains in the entire Cascade chain.

STAFF: Efficient and pleasant counter staff who keep the line moving, even during the lunch rush.

OVER-ALL: Best lunch value in the city of Mount Shasta, bar none. Clean and laid-back, the perfect setting for time with friends or to be in the company of yourself.

COST: Inexpensive. Two can dine well for around $22.00, including coffee.