Solomon Hits Home Run With The Murder of Willie Lincoln 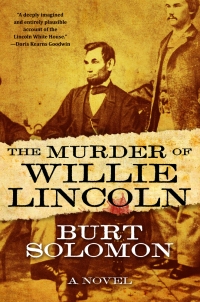 “Fair play” whodunnits are the most difficult kind of novel to write. The genre, by its nature, requires a highly convoluted plot with many characters, most of whom have to appear shady enough to be criminal as they engage in myriad questionable activities. Save for the actual perpetrator of the crime, they all only exist to distract the reader.

In these types of books, the relationship between reader and author is an adversarial one, with author  trying to outwit reader as he tries to guess the perpetrator before the denouement. And if the reader actually guesses the perpetrator, the author has failed miserably.

It’s complicated work demanding extreme concentration being done for an audience eager to eviscerate it. The format is so structured and paced that it resembles, at best, kabuki, and at worst, a Popeye cartoon. Yet even when plotted and narrated brilliantly, a whodunnit that lacks memorable characters and vivid and credible surroundings will sink without a trace.

Burt Solomon decided that all this wasn’t enough of a challenge, so he decided to make The Murder of Willie Lincoln an alternative history novel, one in which the events correspond so well to known history that had he gone back in time and actually made the changes he wrote about, it wouldn’t have made a ripple in our own time stream.

In turn, Solomon populated his book with a startlingly high percentage of characters who really existed in the tawdry and filthy little dive known as Washington City back in 1862. Even the most minor characters are based on actual personages of the time, from the movers and shakers in government to most of the slaves. The narrator, John Hay, was a member of the Lincoln White House, and also was a poet. It was Solomon’s choice to make him an amateur pugilist as well, perhaps the one element that didn’t ring true.

Solomon’s portrayal of Lincoln is most impressive. Of all the presidents, Lincoln has both the best known and most mysterious personality, and Solomon does a fine job of capturing his remote grandeur and warmth. The environs of what is now DC are also particularly striking here, as the accuracy of Solomon’s historicity has won acclaim from many students of the era, including historian Doris Kearns Goodwin.

The Murder of Willie Lincoln is a brilliant historical novel, but how does it really work as a whodunnit? I was personally convinced I had sussed out the killer of Willie Lincoln with about 50 pages left. But in the end, I was wrong. Thinking back, Solomon gave me a fair shot at solving it, again showing the author met one of the prerequisites for the genre.

An original narrative. Captivating characters (Hay as narrator is pure poetry resulting in some memorable descriptive passages). On all levels, this book works, and it works well. As a reader, you can’t demand any more than that.