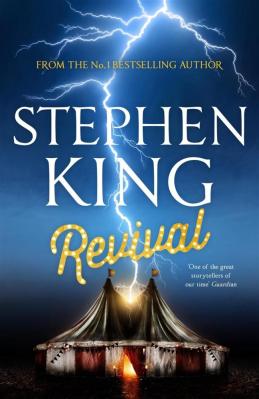 Stephen King is no stranger to controversy. Leaving aside for the moment the endless debate over his literary merit, he routinely upsets people with his language, his sometimes bleak vision, and, of course, his gleeful use of dark supernaturalism (which translates in the minds of some as promoting Satanism). For example, In It, he reveals that Beverly, the 12 year old protagonist in the first part of the story, defeats the evil clown through the magical power imbued on her by having sex with the four boys with whom she is facing the evil. Thirty years later, some people are still twitching and gibbering over that plot-line.

In Revival, King tackles faith, Christian faith in particular, and not only finds it wanting, but finds it spectacularly false. That should ruffle some feathers as well.

But King will prevail, and it’s not just because he’s probably the most popular author in the western world. It’s because Revival is a brilliantly imagined tale of a man’s struggle with faith and the afterlife. This struggle spans some six decades and is described in stages – a great rendering of the course of human lives that takes place over many years.

In some cases, that rendering is not figurative. This is bad enough when King is being King. But this time there’s a strong overlay of H.P. Lovecraft, with a emphatic nod to Mary Shelley. The Lovecraftian elements go well past homage and into the realm of pastiche, and he does it very well. In particular, the final part of the book reminds me of a Lovecraft short story, “The Colour Out of Space,” which utterly terrified me as a kid. In light of this revelation, I’m thankful I didn’t encounter Revival as a ten year old. It’s harrowing enough to read with an adult’s sensibility.

The title is a triple pun, although it would be a spoiler to explain how it actually works. The writing is, by King standards, succinct; the pace is as solid as anything King has ever managed.

After reading this novel, you’ll never look at thunderstorms, tent revival meetings, or even tame little Methodist church gatherings, in quite the same light again.

This entry was posted on November 25, 2014 by Jacob Aiello in 2014, In the Spotlight, November 2014, Rat On Fiction & Nonfiction and tagged Book Review, Books, Guest Review.