All of You: The Last Tour

ALL OF YOU: THE LAST TOUR. A remastering of recordings by John Coltrane and Miles Davis from their Spring 1960 European tour. Acrobat/Trapeze Music & Entertainment. 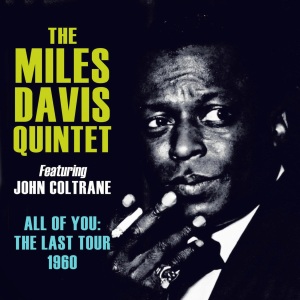 Since his death, John Coltrane has been worshiped as a god (see “Yardbird Church,” in which Parker is the second banana). But as time mellows the memory of his music, he is now reigns as the patron of the St. John Coltrane African Orthodox Church in San Francisco.

The adulation for Miles Davis, if more secular, is even more fervent after Congress declared his music “a national treasure.” Davis is, perhaps, America’s best-loved and best known pure jazz musician.

In 1959, the duo served as the core of the Miles Davis Quintet after having produced what many critics and fans called the finest jazz album ever. The record was titled Kind of Blue and it was based on an exciting new type of music termed “modal jazz.”

The following year, the group toured Europe. The legendary event doubtlessly mesmerized audiences featuring pieces from ‘Round About Midnight, Miles Ahead, Milestones, Porgy and Bess, Sketches of Spain, and of course Kind of Blue.

The music from that tour was fragmented, hard to find, and of sketchy sound quality. Perhaps the greatest event in the history of jazz, and much of it seemed lost to history. Until now.

All of You: The Last Tour, just released by Acrobat Records, is a the perfect capstone to the incredible work of two of America’s greatest geniuses – this gift to the world of jazz lovers across the globe.

All of You: The Last Tour features John Coltrane on tenor sax and Miles Davis on trumpet. With Wynton Kelly on piano, Paul Chambers on bass and Jimmy Cobb on drums.