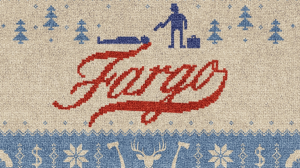 The crossover between big screen and little screen is pretty much a one-way street. Very few television shows do well as feature movies, but quite often movies can easily transition to the small screen, even when major changes are required. M*A*S*H is a prime of example of how well this can work.

Nonetheless, when I heard a small screen adaptation of Fargo was in the works, I was skeptical. The three main actors in that flick were absolutely iconic in their roles (Francis McDermott, William H. Macy, and Steve Buscemi). How could you replace them? Then there was the pitch-black humor of the movie that only Joel and Ethan could manage. How could anyone establish the right Coen-tone in a TV series?

But the premiere of the ten-part series (FX and Netflix) does not disappoint. The ever-versatile Martin Freeman takes a break from hob-nobbing with hobbits and deranged detectives, and becomes archetypal small-town nebbish Lester Nygaard – insurance salesman and walking time-bomb. Billy Bob Thornton channels Spock and Loki to become Lorne Malvo (yes, Malvo), an assassin-for-hire who decides he’s going to be helpful to Nygaard in a Leland Gaunt sort of way. Molly Solverson (Allison Tolman) is not pregnant and does not have a duck-stamp designing husband, but seems destined to play the Francis McDermott role. Solverson is likely at some point to utter the immortal words, “Ya, you betcha!”

As with the movie, the landscape becomes central to the ambiance, and the frigid plains of eastern Alberta are quite serviceable as a substitute for eastern Minnesota or anywhere in North Dakota.

Is it black? Is it funny? Does it make you cringe and laugh simultaneously? Is it worthy of Joel and Ethan Coen?

Yes on all counts.

The Coens serve as the executive producers of the show, and the duo also have partial writing credits in three episodes. Noah Hawley (Bones, The Unusuals) is credited for six episodes.

This entry was posted on April 17, 2014 by Jacob Aiello in 2014, April 2014, Guest Reviews, In the Spotlight, Television and tagged Guest Review, Television.