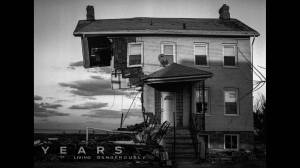 It was, for me, an extraordinary night of television. First, there was the fifth episode of deGrasse-Tyson’s “Cosmos” in which he discussed the nature of light, using a level of literacy and erudition entirely absent from American commercial network television for the past 50 years or so. On the third hour, I watched the season premiere of “Game of Thrones” – a sedate affair in which the entire core of the cast was alive, with a minimum of murders, rapes, and crucifixions. Thirteen year old Arya Stark only killed two people this time.

In between was what has been described (and not just by Showtime publicists) as a major event in television documentaries; the first of a nine part weekly series, “Years of Living Dangerously.” If the series is as well-made as the first episode, it may very well live up to that billing.

It tells three stories; Last Stand, in which Harrison Ford travels to Indonesia to examine the role deforestation has on CO2 emissions. What he finds is staggering; world-wide, deforestation is responsible for twenty percent of emissions. Palm Oil cultivation alone is responsible for four percent. He tours a palm plantation on a National Park on Sumatra, one that emits as much CO2 as 1.3 million cars, and destroys irreplaceable jungle. Of the 86,000 hectare national preserve, only 14,000 hectares remain. At the end, a visibly, and apparently genuinely, furious Harrison Ford demands to meet with the corrupt official responsible, the Indonesian Minister of Forestry.

In Climate Wars, Tom Friedman travels to Syria (incognito, and at considerable personal risk, as he is in regions controlled by al-Qaida) to ascertain the role of a ongoing multi-year historic drought and the role it has played in causing Syria’s civil war, and the budding civil war in neighboring Turkey. Nearly all the people he speaks to agree that were it not for the drought, the mass migrations, and probably the war itself, would not have happened.

And in the third segment, Pray for Rain, Don Cheadle travels to Plainview, Texas, where 2,400 workers were out on the street because the Cargill meat-packing plant closed. The reason? Most of the cattle in that region had to be destroyed because of the drought. Cheadle, deep in bible-belt country, talks to a woman who is reaching out to Christian fundamentalists, striving to convince them that drought is a result of human activity, and if the Will of God is involved in any way, then by altering the climate, humanity is defying that will.

The stories are both affecting and engrossing, honest and unsparing. It may remind people of Sixty Minutes during the days of Morley Safer, Mike Wallace, and Ed Bradley. Solid journalism, great storytelling, high standards of production.

Showtime is offering the first episode free at their website. You can view it here.

This entry was posted on April 9, 2014 by Jacob Aiello in 2014, April 2014, In the Spotlight, Television and tagged Guest Review, Television.