Mozart In the Jungle 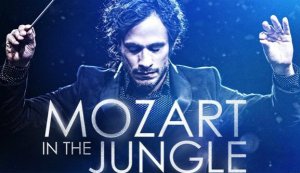 Early in the episode, the symphonic orchestra is putting on a show: Malcolm McDowell is conducting, and Joshua Bell, the famed conductor/violinist, is playing something frantic that involves a lot of sixteenth notes. Both men are in a frenzy, and watching McDowell, I suspect he actually does conduct. With Joshua Bell, there’s no guessing; he is consummate.

The piece finally finishes, and the two men embrace after bowing to the orchestra and to the audience: “I hope I wasn’t too fast for you” Bell whispers. “Oh, no,” McDowell responds, “I thought you were rather sluggish.” Both turn and give the audience their widest smiles.

Thus, the tone is set for Mozart In the Jungle, an Amazon original that combines the best elements of Girls, This Is Spinal Tap and classical music. As viewers will readily see, the people starring in this production love and understand music, and the wit on display is equal to the gravity of the music. In turn, the result is playful and fun – a true delight to watch and hear.

For maximum enjoyment, Mozart In the Jungle is best viewed on a set with a good sound system.