MASTERMIND: HOW TO THINK LIKE SHERLOCK HOLMES. Maria Konnikova. Penguin. 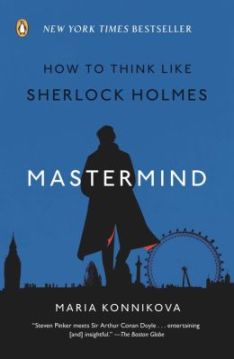 Really, the question isn’t whether you should think like Sherlock Holmes, but if you would want to. In his acclaimed “Sherlock” BBC series, Steven Moffat has the detective overhear one member of the plod complaining to another policeman about “letting that damned psychopath into a crime scene.” Sherlock (Benedict Cumberbatch) interrupts loftily, “I am not a psychopath. I am a high-functioning sociopath.” The mind of Holmes is a rather cold, bleak, lonely place – Halifax in November.

There’s also the fact that Holmes’ genius doesn’t withstand close scrutiny. In “Hound of the Baskervilles,” he catches the faint scent of perfume on a note, and is able to identify it because it is one of the most popular seventy-five scents, which he has memorized. It’s a conceit that has been parodied from the time of Arthur Conan Doyle, beginning with Stephen Leacock (The “Great Detective” and his accomplice, “The Poor Fool”) to the Batman TV show (“Holy Ridiculous Expletive, Batman! How did you know it was the Riddler who sent all that coal to Newcastle?”) to the battle of wits in “The Princess Bride” between the Mysterious Stranger and the Sicilian. Much of Holmes’ genius springs from the mind of a man who spent the last twenty years of his life trying to prove that garden faeries exist.

If none of this comes as any surprise to you, then you might be exactly the type of person most likely to benefit from reading “Mastermind: How to Think Like Sherlock Holmes” by Maria Konnikova. Right out of the gate, you’ve already demonstrated two traits needed to improve and focus your thinking: you’ve made an unprejudiced analysis of the subject, and you’ve used observation and deduction to arrive at a conclusion.

In her book, Konnikova has taken the patterns used in the Sherlock stories and shown how a person willing to reorder his thinking and memorization skills (in his “Brain Attic”) can become more effective in the day-to-day practice of life.

As I reflect, I have little doubt that Professor Konnikova is sharply aware of the air of absurdity that underlies Holmes’ genius: she uses the “seventy-five perfumes” example early on in the book, and addresses the issue of Doyle’s fixation on faeries in the final chapter, endearingly entitled “We’re Only Human.” In a dead giveaway in the Postlude, she discusses at length the difference between incremental and entity intelligence: The former is the result of self-discipline and training by Sherlock, the latter by the willingness of The Poor Fool—Watson—to declare problems beyond his, or anybody else’s, comprehension. Readers will note that Konnikova strongly aligns with the notion of incremental intelligence – the ability to train, discipline and enhance the intellect to make our lives more effective.

So why Sherlock? He’s an engaging character, and we all share Watson’s awe and credulity. We admire the precision and discipline of his mind, and it’s no coincidence that two of the most enduring characters in American fiction, The Batman and Spock, have similar types of minds. (Both, by normal psychometrics, would be considered psychotic, and indeed, Sherlock might be so considered as well).

“Mastermind” is not a book that will universally appeal to every hard-boiled fan of the detective. Instead, the reader must be willing to step out of himself and enter Holmes’ shadowy psyche.

But how do we get there?

At one point in the Postlude, Konnikova discusses distancing through visualization (a trait Sherlock often uses), and wryly notes that by doing so, you have performed an act of meditation. “Sneaky, isn’t it?” she asks.

Yes. Sneaky. And quite a worthwhile journey.

This entry was posted on January 1, 2014 by Jacob Aiello in 2013, December 2013, In the Spotlight, Rat On Fiction & Nonfiction and tagged Book Review, Books, Guest Review.