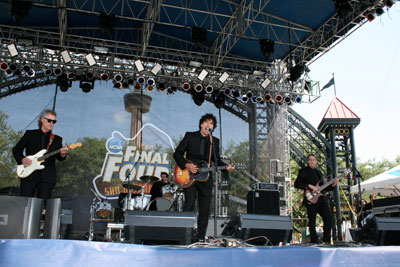 Photo courtesy of The Krayolas. All rights reserved.

Interesting new rock and roll has been incredibly sparse this summer, but the San Antonio-based Krayolas latest release, “We the People,” bucks the trend: a bright and bouncy muscle-bound piece inspired by Dr. Martin Luther King Jr.’s “I Have a Dream” speech.

Dr. King’s delivery of the speech at the Lincoln Memorial on August 28, 1963 launched the Civil Rights Movement, stitching random communities into a single strip of fabric. In turn, the Krayolas step out to celebrate the moment during an era when the hatred and bigotry that originally gave rise to Dr. King’s words have resurfaced in white hot waves to threaten the heart of the nation.

Hector Saldana, who founded the Krayolas in the late 1960s, says: “On my birthday last Sunday [August 18], I gathered the band at Blue Cat Studio along with the West Side Horns to record “We the People.” I wrote the song completely in my head while on the road this summer to commemorate  MLK’s “I Have a Dream” speech. The message has been on my mind this summer, as the racial divide dominated the news. A lot of it was ugly and scary. But I was inspired to try and tap into the spirit of MLK’s message and marry it to a happy upbeat song with an honest, positive vibe.”

In keeping with Dr. King’s mission, the Krayolas are offering “We the People” for free at thekrayolas.com and at soundcloud.com. Furthermore, the band “encourages everyone to share the song on social media via Facebook, Twitter, Tumblr and Google+ as a sign of solidarity with the dream for equality and peace in the world.”