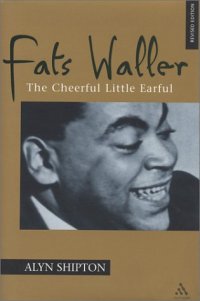 FATS WALLER (THE CHEERFUL LITTLE EARFUL). Alyn Shipton. Continuum. Music historian and journalist Alyn Shipton believes that the true genius of Fats Waller has not be fully explored nor appreciated by music fans from around the world. And in the revised edition of his book Fats Waller, Shipton makes a pretty good case for his theory.

Fats Waller was simply a magnificent pianist whose work influenced countless generations of musicians – from jazz players to rockers to bluesmen. Further, Waller’s work also had a huge impact on Beat writers such as Jack Kerouac and Lew Welch who were attracted to the silken complexities of Waller’s lilting and layered style:

“Every biographer of Waller has been impressed with his playing – he was, after all, the leading stride pianist of his generation – but he deserves equal consideration as a master songwriter, show composer, and recording and broadcasting artist. Despite the serious aspects of Waller’s legacy, his abiding gift to the generations that followed is his boisterous good humor. It is a rare talent to make an audience laugh aloud at an aside on a gramophone record. That Waller could manage this feat often, and that his irrepressible bonhomie has stood the test of the decades that have passed since his death, is a tribute to his rarest quality of all – the ability to communicate his enormous talent and personality to every listener.”

(From Shipton’s Preface, at xi)

Even now, most people have no idea just how much music Waller made in his lifetime (from scores for the Broadway stage to the hundreds of songs he penned and performed with his band). Simply, Waller is a man whose legacy endures in the fact that we can hear the blood of his influence pumping through the veins of so many of the musicians we listen to today: You’ll hear strains of Waller’s intimate style in the playing of Garth Hudson, Roy Bittan, Ray Manzarek and Al Kooper — deep and soulful, fingers milking sound from piano, drawing music from the musty candles of the half-muffled silence.

In retrospect, Waller was a complex player, and his sound an amalgamation of history and street poetry and old-time jazz, stirring together the steps of hundreds of unknown musicians who would perish in obscurity. And the beauty of Shipton’s book is that he’s able to bring all this out in a seamless narrative which traces the whole of Waller’s career step-by-step (Harlem to Europe, and all stops in-between).

In short, this is a well-honed chronology detailing the life and intricate legacy of the most influential jazz pianist of the modern era (with Shipton careful to acknowledge the fact that people from around the world remain influenced by these songs without even knowing it’s Waller that they should be paying homage to). Finally, we have a book that sets the record straight and brings some attention to the Fat Man behind the piano.

Appropriate as a teaching text in music history/music appreciation courses; also will appeal to casual fans of jazz providing insightful commentary on this often overlooked pianist. Would further be useful as a general reference text in both college and public libraries.

To order go to amazon.com or see continuumbooks.com.