From the Editor: The Electric Review is privileged to announce the public debut of Eric Ward’s art work. Ward, who works and resides in San Francisco, is a true American original. An artist adept at celebrity portraits, as well as cartoon panels and multi-dimensional pieces done in water color.

In these selections, Ward offers his perceptions on the American ‘face.’ Timeless and bold, these interconnecting lines give rise to the infinite scope of the world that exists just beyond the lips of the Eye.

Again, The Electric Review is proud to present Eric Ward: presenting art for the sake of art. True and bold this American original. 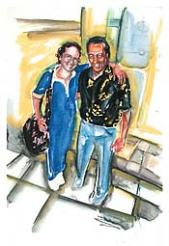 Eric Ward’s paintings of Bond and Diana Rigg provide a perfect segue into a discussion of BOND GIRLS ARE FOREVER (The Women of James Bond). Maryam d’Abo and John Cork. Abrams. This wonderful photo study is the first to look at the sexy and seductive women who made up the Bond films. Bond was our classic super-hero: he had it all – fast car, nice suit, and the most beautiful chick the world had to offer on his arm. He was what every man admired. He was what every man wanted to be. But Bond Girls takes us beyond the mere idea of James and allows us to look at the hearts and souls of the women who served as his co-stars: As we flip through these pages and sit mesmerized by the memories of the films, we start to see the way that the world has changed in the last 40 years – witnessing the changing face of the American woman through the history of James Bond on film: “It’s so strange,” says Honor Blackman, who played Pussy Galore in Goldfinger. “When I did the film, it was just a film. It was lovely working with Sean. I wouldn’t pretend otherwise. But who would guess it would have such a future?” And a grand future it had indeed! Bond was the precursor to the super hero flicks of the 80s. Without Connery would there be a Sly Stallone? Bond Girls takes many a bold risk in examining this idea from the point of view of the women who helped shape these films – those pin-up sex symbols who oozed appeal and reeked of the abandonment of desire. Honey Ryder, Pussy Galore, Holly Goodhead, Jinx. They’re all here, the thumbnail sketches of the ladies and the movies in which they appeared written in crisp and succinct lines – literal ‘word pictures’ that bring our memories back into the light of life. Also check out the full-page reproductions of the pulp art that was used on Ian Fleming’s books. Great gift idea for Bond fanatics and the casual movie fan.

To order go to amazon.com.

Also of Note From Abrams

HOLLYWOOD HORROR: From Gothic To Cosmic. By Mark A. Vieira. Abrams. Hollywood Horror traces the history of the infusion of “horror” into modern film, recording the perceptions of the very artists who refined the genre. In surveying 160 of our most influential horror films, Hollywood forsakes critical analysis to show instead how these films have evolved during the last century. Formatted in chronological order, Vieira divides the text into the four primary periods of the genre (Gothic, Psychic, Atomic and Cosmic), with stunning photographs that illuminate the scene within the story. Also note the informative segment on the emergence of the “monster” into American film. Must have for all horror movie buffs; would be an appropriate teaching tool in university level film study courses as well.