Neil Young is one of the most prolific musicians to emerge from the rock n roll boom of the 1960s and ‘70s. According to Young, “Rock and roll is just a name for the music of the young spirit—of what is happening right in front of us.”

Yet, unlike some of his former band mates including David Crosby and Danny Whitten, Young is still very much alive, creating relevant music, keeping his fans guessing which direction he will take next—Folkster Hippie or Godfather of Grunge, and showing no signs of retiring anytime soon. Jimmy McDonough, author of Shakey concludes, “For many, he’s [Young] one of the few reminders outside of Dylan that anything happened at all in the sixties.”

Up until recently however, Young’s tale has been only sparsely documented, mainly as a result of his stubbornness and reclusive nature. But after countless hours of persuasion or rather, begging, McDonough was awarded access to the kingdom that is Neil Young, who on any given day may morph into Bernard Shakey (filmmaker), Phil Perspective (album producer) and other alter ego’s. Even with Young’s blessing, his attitude towards the book was: “We’ll make an art project out of it if it fuckin’ kills us…I’m not gonna read it.”

Shakey is the result of following Neil Young on tour with his greatest and supremely dysfunctional band, Crazy Horse, conducting fifty hours of interviews with Young himself and interviewing another 300 people, most of whom are as eccentric and unwieldy as Neil. Thus, McDonough has written the definitive biography of a true legend who still believes “It’s better to burn out than to fade away.”

The bulk of the book (about 350 pages) focuses on the late 1960s and the entire 1970s. During this time, Young developed from an awkward, quiet, semi-talented kid into a full-blown musical and entrepreneurial force whose recorded output is unparalleled (forty six albums from 1967-2001). And this doesn’t even include the never-ending archives project in development for over two decades now.

To the casual fan, the length of Shakey may seem bloated (nearly 800 pages), but McDonough’s writing is fluid, always witty, and never loses its focus. McDonough is obviously a huge fan of Young’s, but that doesn’t prevent him from including the dark and unglamorous elements of Young’s history. The narrative constantly pushes forward, whether Young is recording a new album, going on tour or dealing with personal family issues. But McDonough’s greatest strength lies in his ability to open up a time capsule, whooshing readers back to the dawning of the hippie era when America was in a tremendous social, political and cultural upheaval.

We experience first hand the chaos of a Crosby Stills Nash and Young gig: “Some nut in the audience starts to harangue CSNY for being rich rock stars, and Stills…bolts from the stage, high as a kite in an outrageous fur coat, and goes after the guy as Crosby pleads for ‘Peace and love’ over the microphone.” Or Young’s triumphant return in the early nineties, performing a blistering version of his angst-ridden anthem, “Rockin in the Free World” on Saturday Night Live.

In reading Shakey, one can only admire the painstaking effort that McDonough put into the research and writing of this behemoth of a biography. Yet, for an artist like Neil Young, this book may simply be the beginning since his new CD, Greendale, is one of his best albums yet. 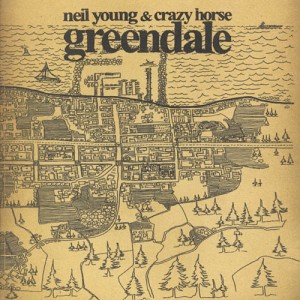 It seems like Young has once again regained his musical focus. Though his last few albums were decent, they lacked the passion and emotional intensity of his ‘90s comeback album, Ragged Glory, or Harvest Moon, the sequel to his acoustic masterpiece, Harvest. Greendale is a concept album or rather, a rock opera in the realm of the Who’s Tommy, but it’s also a strong political stab against our media-obsessed culture and the current administration’s influence on a paranoid, once impenetrable country.

Greendale is the name of a fictional small town in Northern California and the story focuses on the Green family. The main characters include Grandma and Grandpa, their child Earl, his wife Edith and their daughter, Sun Green. The opening song, “Falling From Above,” introduces us to the family and Grandpa’s hopeful, yet idealistic beliefs that seem outdated in modern times. He imparts upon his teenage granddaughter, Sun Green, “A little love and affection in everything you do will make the world a better place with or without you.” These lyrics set the tone for the eventual clash between Grandpa’s traditional values and America’s corporate controlled, technologically advanced attitudes.

While the lyrics are pure Neil Young—simplistic, straightforward, hard-hitting and poetic, the music is beautifully raw with little to no overdubbing or excessive production that has plagued some of Young’s recent work. He fingerpicks most of the tunes on his trusty axe, Old Black, which perfectly accentuates the country/blues feel of Greendale. Young’s voice is also in fine form, capturing the essence of every character and making them his own. In the melancholy acoustic ballad “Bandit,” Young’s voice is a barely audible drone and then, during the chorus, he reaches an ethereal high pitch, instantly recognizable as one of the most unique voices in popular music. Also, throughout Greendale, Young pokes fun at himself. In “Grandpa’s Interview,” while lying on the ground after suffering a heart attack, Grandpa yells: “that guy who just keeps singin’/can’t somebody shut him up? I don’t know for the life of me where he comes up with this stuff”

In addition, Young’s off and on band of thirty years, Crazy Horse, is back. Never being known for their musical prowess, ‘the Horse’ are at times sloppy and minimalist, but they are a solid rhythm section, always taking a backseat to Young’s incendiary guitar playing and unique vocalizations. Crazy Horse proves once again to be an inspiration to Young and his ambitious visions.

I recently had the opportunity to catch the entire Greendale performance on stage, complete with actors, props, and bare bones sets. It was an odd experience; for one, the songs were unfamiliar at the time and watching Young perform while a bunch of actors lip-synched his words was bizarre. However, the songs were accessible and the story quickly engrossed the audience. And the usually reserved Young narrated in between songs giving us background info on the characters—“Well they had a wake for grandpa…”

What stood out most though was that here was an artist who unlike some of his contemporaries (The Rolling Stones, The Eagles, etc) who is still pushing the boundaries; into his fifties, Young is willing to attempt something completely new and refreshing. And his creativity doesn’t end there: check out Young’s website (neilyoung.com) which has family trees and bio’s on the Green family and art galleries featuring Earl Green’s psychedelic paintings. Oh, and a DVD featuring Young performing Greendale solo is included in the package. How ironic that two of the most creative musicians of the ‘60s and ‘70s, Dylan and Young, continue to influence current rock bands while forging ahead with their own individual artistic statements.

Go to amazon.com to buy either item.

Ryan Bacchia is a former instructor in the College of The Siskiyous’ Writing Lab; he is presently enrolled at California State University, Sacramento in pursuit of a Master’s degree in English.